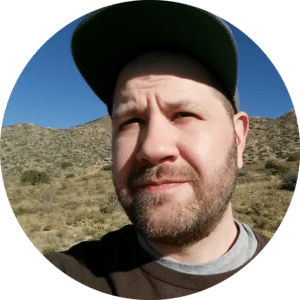 “Brett Baker” aka “ESKR” …immortalized in the electronic music community as one of the most profoundly inspired sound designers and recording engineers of our times, tactfully infiltrating the world stage for more than twenty years. This highly motivated, relentlessly driven, innovator of Drum & Bass has been pushing the sound forward since the turn of the century. ESKR’s legacy is the very definition of dedication and consistency.

Honing his incredible talents for over two decades now, ESKR began his journey in Minneapolis as a Jungle and Breakcore selector in 1999. As his love for the underground music scene evolved, he simultaneously discovered what would be an undying passion for electronic music production, diving head-first into the never-ending abyss of studio gear acquisition. With the purchase of a Roland MC-505 Groovebox and a Boss SP-202 Dr. Sample, he was well on his way to building a life-long career in the music industry.

Under the alias, “Azrael” he hit the ground running in the year 2000 with a publication on Pure Pleasure Records, and shortly after international DJ performances in France. His debut release, “Anxiety” appeared on a various artists compilation of cutting-edge underground sound entitled, “TwinTown Technique Volume 1”.

Venturing further out into the world, ESKR relocated to San Francisco, California in 2001, where he quickly became a figurehead of the Bay Area Drum & Bass scene. Working as a vinyl associate for several years at DanceRecords.com, ESKR also held down residencies at Solution, Rhythm Method, and Trauma, all popular nightlife havens in San Francisco’s early 2000s era. Continuing his pursuit of uncompromising musical integrity, he formed the Drum & Bass collective known as, “Company Truck” producing a slew of heavy hitting, hard stepping, all original releases that never failed to deliver a colossal ruckus to any sound system and every dance floor.

In 2007, ESKR began producing Dubstep under the alias, “Ceeker”. In two short years, he had signed more than twenty releases to over a dozen well established labels such as Betamorph, Mal Label, Filthy Digital, Shift, Abducted Dub, Stupid Fly, and many others, continuously topping best seller charts in the genre.