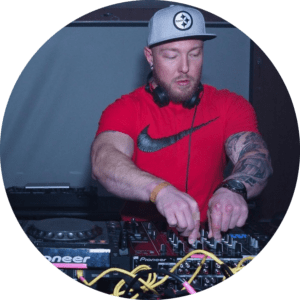 Dieselboy. Reid Speed. AK1200. Gridlok. Evol Intent. Hive. Fury. Submerged. The list goes on and on and on regarding influential and genre defining drum & bass artists hailing from the United States, yet looking at that list one thing is apparent: no one has risen up from the land of the free in a long, long time.

That’s about to change.

Enter Tom Kinsey. The Pittsburgh born and bred bodybuilder / personal trainer turned neuro prodigy has had at it for quite some time and the results are starting to stack up considerably in his favour. After having circled around the American usual suspects Divination and Abducted, he’s finally graduated towards Europe, first with releases on Close 2 Death and C4C and then getting onto ProtoCode and Korsakov Music. As promising a trajectory as any.

It wasn’t always likely Dropset was going to make it. Growing up with classic rock, hard rock and hip hop, he segwayed into electronic music when he heard the Disco Deathrace mixtape by DJ Keoki in 2000, aged just 13. Then when he stumbled across DJ Dara at a party 2 years later, his love for dnb started and there was no turning back. He’d immerse himself in the sounds of Ram Trilogy, Ed Rush, Optical, Bad Company, Loxy, Ink, C4C and all of those legends that formed our music the way it is today. Until he figured he needed to not just play it. Tom needed to make it. And so he started.

50 years from now, will he be named in one breath with all the immortal legends that paved the way for him to pursue a career as a drum & bass artist? No one can tell. However, if there was ever anybody from the US with the skillset, motivation and talent in the new generation of producers, it would be Dropset. The future will tell. Get ready for him to show you all.